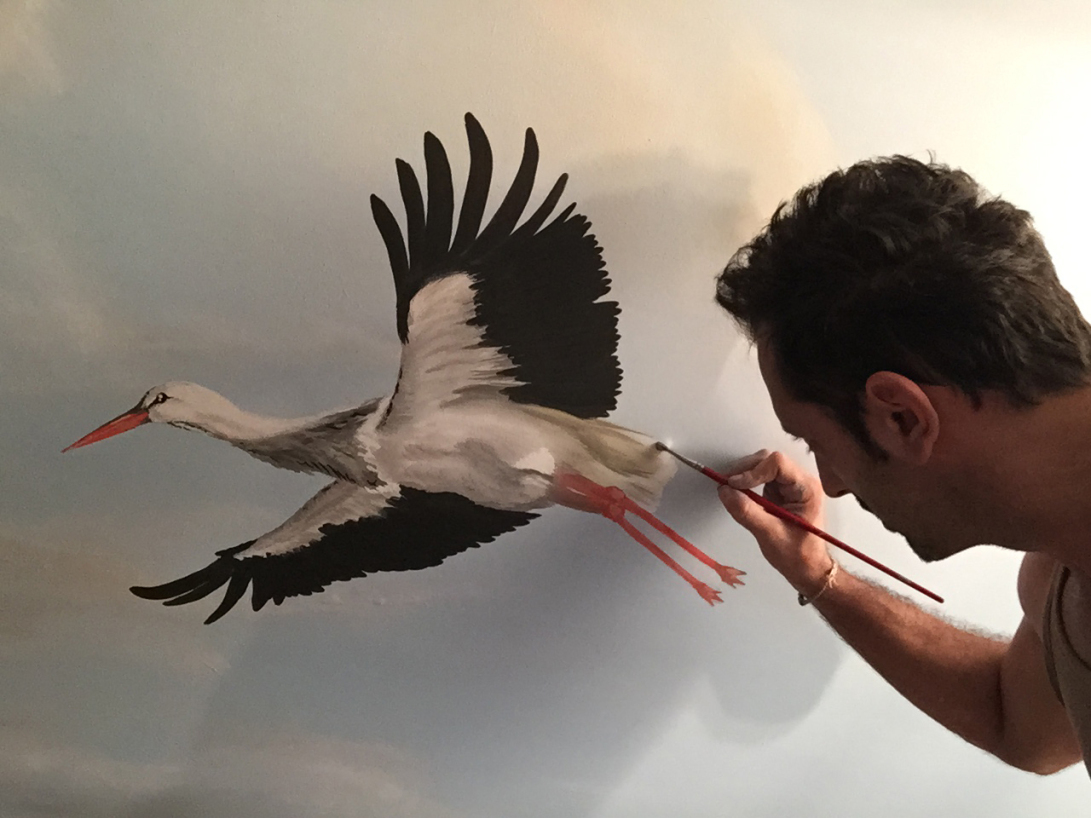 Born in Acqui Terme on 12 July 1975, Diego Bormida attended the Liceo Scientifico in our city, determined from an early age to be a painter, and then attended the Academy of Fine Arts in Florence, where he graduated in pictorial decoration and where he subsequently worked, in collaboration with prof. Beppe del Debbio, to the Medici villa of Calenzano.

The Florentine period proved decisive for the formation of the young and multifaceted artist, who was able to successfully follow various complementary courses: techniques of marble and semi-precious stones, foundry, sculpture technology, photography, history of architecture, mass media. , phenomenology of contemporary arts. In this way he has innervated the congenital aptitudes to drawing and painting of solid technical and cultural skills.

At the same time he combined grammar with practice. Four years in Rome, where he collaborated with various artists, allowed him to thoroughly acquire the secrets of the trade, but without calming down and settling into the comfortable measures of the ordinary. And perhaps this is precisely where the real secret lies and – we would say – the stigma that distinguishes the craftsman from the genius artist. Jobs’s motto is perfectly suited to a talent who, despite being very young, already has an enviable curriculum to his credit and nevertheless proves to look beyond, to have more ambitious goals.

Now we cannot help but go back to the most important stages in the career of this promising Acquese artist who in 1997, at the age of twenty-two, won the “David Molinari” competition, organized by the Florentine Academy of Fine Arts, with a half-length porcelain stoneware now on display in the municipal library of Figline Val d’Arno.

The following year, still paired with prof. del Debbio, he tried his hand at decorating a private chapel on the Antinori estate in Bolgheri and then went, alone, for over two years, to create faux marble, trompe-l’oeil, ceilings decorated with skies and gazebos in the royal palace of one of the princes of Saudi Arabia, in Riyadh.

After that, in 2004, he restored a dozen ceilings in the eighteenth-century Villa Scati, in Quartino di Melazzo.

It will be said that so far we have remained in the field of applied art, where the freedom of the artist is strongly conditioned, on the one hand, by the needs (and tastes) of the client and, on the other, by the available spaces and their specific destination: consideration certainly not devoid of truth, but remember that the skill of an artist lies precisely in taking charge of the imposed limitations and transforming them creatively into occasions for easy performances.

Diego knows how to accept challenges, without getting discouraged. And above all without becoming fossilized in a job, in an activity. In his case, art is more than a profession: it is a passion, a pleasure, a fun.

He prefers experimentation to specialization, contamination to seclusion, eclecticism to uniformity. In fact, he casually spends from painting to sculpture, from decoration to scenography, from restoration to interior furnishings.

It would take too long (and even boring) to insist on a mere listing, but we cannot ignore its participation – sponsored by the well-known brand “Baci e Abbracci” – in the international exhibitions held in 2007 in Milan, as well as in the filming of films such as Il Gioiellino by Andrea Molaioli, shot in Acqui Terme (2010), and Il Vedovo by Massimo Venier (2012), with Fabio De Luigi and Luciana Littizzetto.

Scene painter, he feels completely at ease in modernity, where the spaces of decoration have been enormously expanded, finding unprecedented applications, in fact, even in the theater, in the cinema, in events organized for spectacular or celebratory purposes, and where, after the excesses due to the detachment from the architecture, the decorative effects return to be sought in the quality of the materials, in the refinement and preciousness of the execution, in the stylistic congruence between the whole and the parts.

From what we have personally seen and ascertained, it seems to us that Diego interprets the needs of modernity without hesitation and without subjection. We are convinced, for example, that the great artists of the Renaissance and the Baroque – from Raphael to Leonardo, from Michelangelo to Caravaggio – remain irremovable touchstones for him, but that he tries to adapt their lesson to today’s world, renewing it and – if possible – reinventing it.

Today we are immersed in a civilization that differs from those of the past for its dynamic aspects and for its global values. The “liquid” society in which we live constantly burns models and values, under the banner of the ephemeral and the transient, of interculturality, and even art gets involved, borrowing patterns, themes and styles from cinema and photography . The risk is to conform to fashions, but, in this case, it can be remedied with irony, with the critical detachment or with the personal and perhaps alienating reinvention of déjà vu, of the casts, of the topoi.

Diego, a few days ago, confessed to us his passion for bodypainting, which makes a canvas of the female body. By means of a mixed technique and the skilful mixing of warm colors and glitters, the skin can be transformed, with its sinuosity and its chiaroscuro, into a mobile painting, into a flowering of images that can in turn be enhanced by light, by a careful manipulation of headlights and spotlights in order to evoke suggestive atmospheres. Above all – we think – this particular technique lends itself to enhancing the extemporaneousness, because the body surface has a three-dimensionality that, except for artifices or specific adaptations, is missing from the canvas and, for this very reason, it can act as a guide or as a stimulus to the imagination. , suggesting unexpected solutions to the artist, born, so to speak, on the spot, from the inspiration of the moment. And precisely for this reason the espace d’un matin, or rather d’un soir, is destined to last. But this – if you like – is the curse of today’s art, which sacrifices duration to the épate of fashion or to the exploits of spectacularization.

In 2007 Diego began to collaborate with “Fidelity Arts”, the renowned art house in Los Angeles for which the flower of modern art works. It deals, among other things, with the furnishing and artistic and pictorial decoration of cruise ships of companies such as “Cunard Lines” and “Princess Cruises”. From then on he performed his pictorial interventions (oil paintings, murals, floral or Art Nouveau decorations, fake marbles, restorations) aboard sumptuous transatlantic liners of the caliber of the “Queen Victoria”, the “Emerald Princess”, of the “Grand Princess”, the “Queen Elizabeth”, the “Royal Princess” and also the “Regal Princess”, the flagship of the “Princess Cruises”, as well as the Italian “Costa Luminosa”. Between the end of 2014 and the beginning of 2016 he obtained and carried out his most important commission: two ceilings of over 200 square meters depicting the Story of Hercules and his marriage to Hera, daughter of Zeus, after studying for months Greek mythology and having prepared dozens of sketches and preparatory drawings.

In the same location, Villa Bellissima, one of the largest and most luxurious villas in America, located in Salt Lake City, Utah, presented its new collection of oil paintings on canvas. Along with him were James Coleman, Dorit Levi and Kira. He also participated, with his own bronze sculpture, in an event in a gallery in Venice Beach, Los Angeles, California, the FAB ART GALLERY.

Also in 2016 he created a dome painted in the same Villa in Utah and a starry sky made with mixed media and optical fibers in another luxurious Villa in Wyoming, in Jackson.

In September, on behalf of API RESINE, he created a 400 square meter artistic floor on the Royal Princess, owned by Princess Cruise Lines.

In October he was in South Africa, in Johannesburg, where he made a body painting for a music video of English production.

In December he was invited to Park City, the city of the Winter Olympics, in Utah, where he painted, reinterpreting it, the Creation of Adam, in the most fashionable club in the city. The Church Public House.

2017 began with one of his works on display in Venice Beach, California, for an important event at the Fab Gallery, PALIMPSEST.

In the same year he decorated the luxurious Majestic Princess.

After receiving the certification from CHEMCO resins, in Scotland, he started the collaboration with Precetti USA and Carnival Cruise Line, for the realization of artistic pools on board cruise ships.

In December he inaugurated his collaboration with the famous SANTERO winery, creating the 958 SANTERO CALAVERA line, presented at the final episode of the Big Brother Vip.

2018 began with the decoration of 3 Carnival ships in the Caribbean, an API resin decoration on the Majestic Princess in Japan and a long “BODYPAINTING Tour” throughout Italy, to present the 958 SANTERO bottle collection. Bottles also present at Isola dei Famosi, at Big Brother VIP and in other highly successful television broadcasts. Also in the shipyards of the Bahamas and then on a cruise in the Caribbean Sea, the artist created the design of the new water play area of ​​the Caribbean Princess, drawing the geometric patterns that decorate the pool and deck 18, as well as the new ones INSTAGRAM WALLS and a big whale entirely painted with the aergraph.

In 2019 he made numerous paintings aboard the new SKY Princess, and of these, the last painting was made during the first inaugural cruise from Miami to Paradise Island, Bahamas.

In 2020 the artist’s works come aboard the brand new Enchanted Princess, launched in Trieste.

The collaboration with Santero Wines continues to give great satisfaction also in 2021, with about ten artist bottles already made and new bottles on the way. Connected to Santero’s sponsorships is the world of rallying and drifting, in which Diego has entered by creating events and decorating the liveries of some cars participating in the Italian and world championship.

We just have to wish the Acquese painter a good journey and new successes in the professional field, in the hope that he will find a way and time to paint also in the traditional sense of the term: for himself and, perhaps, for posterity. Only in this way will he truly be able to say, with Horace: Exegi monumentum aere perennius… And then we will follow him with renewed enthusiasm.